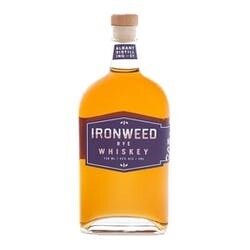 The Albany Distilling Company is a modest operation, producing craft spirits one small batch at a time. It is located in downtown Albany, not far from the site of the city’s original 18th century distillery. Owners John Curtin and Matthew Jager are proud to be a part of New York State’s rich heritage of spirit production.

Ironweed Rye Whiskey is New York’s traditional whiskey. The production of both bourbon and rye are virtually identical: 100% whole grain mashed, fermented, distilled, and placed in brand new charred American white oak barrels. It is the ingredients that distinguish them. Bourbon is made from mostly corn, while rye is made with mostly rye; we source both grains from New York State. Corn gives bourbon its distinctive sweet flavor and notes of dried fruit, while rye makes a much drier, spicier whiskey.

Both are easy to sip neat, but also lend themselves well to being poured over ice or shaken into cocktails.

Save this product for later
Display prices in: USD

IN STORE - Remedies is fully open for in store shopping!

ONLINE  - Buy online and pick up in store or have it delivered.

BY PHONE - Order by phone and pick up in store, at our pick up window or have it delivered